From Stonehenge Festival '83 to present day...

A campfire at the Stonehenge free festival in 1983 witnessed the birth of Ozric Tentacles.
It was there that composer and band leader Ed Wynne (guitar & keyboards), and brother Roly Wynne (bass), who were performing in a group known at the time as ‘Bolshem People’, along with drummer Nick 'Tig' Van Gelder (Jamiroquai), stumbled upon keyboardist Joie Hinton. After a session of warming their bones and discussing imaginary breakfast cereals, the group went to perform an impromptu late jam session. Over the course of what became an epic six hour performance, an audience member inquired as to the name of the band. Randomly thinking back to the group’s former conversation, visions of ridiculous mythical mueslis entered Ed’s mind, and consequently he replied; “Ozric Tentacles”. (…Good job too, since some of the previous alternatives had been “Desmond Whisps”, “Gilbert Chunks” and “Malcolm Segments”). 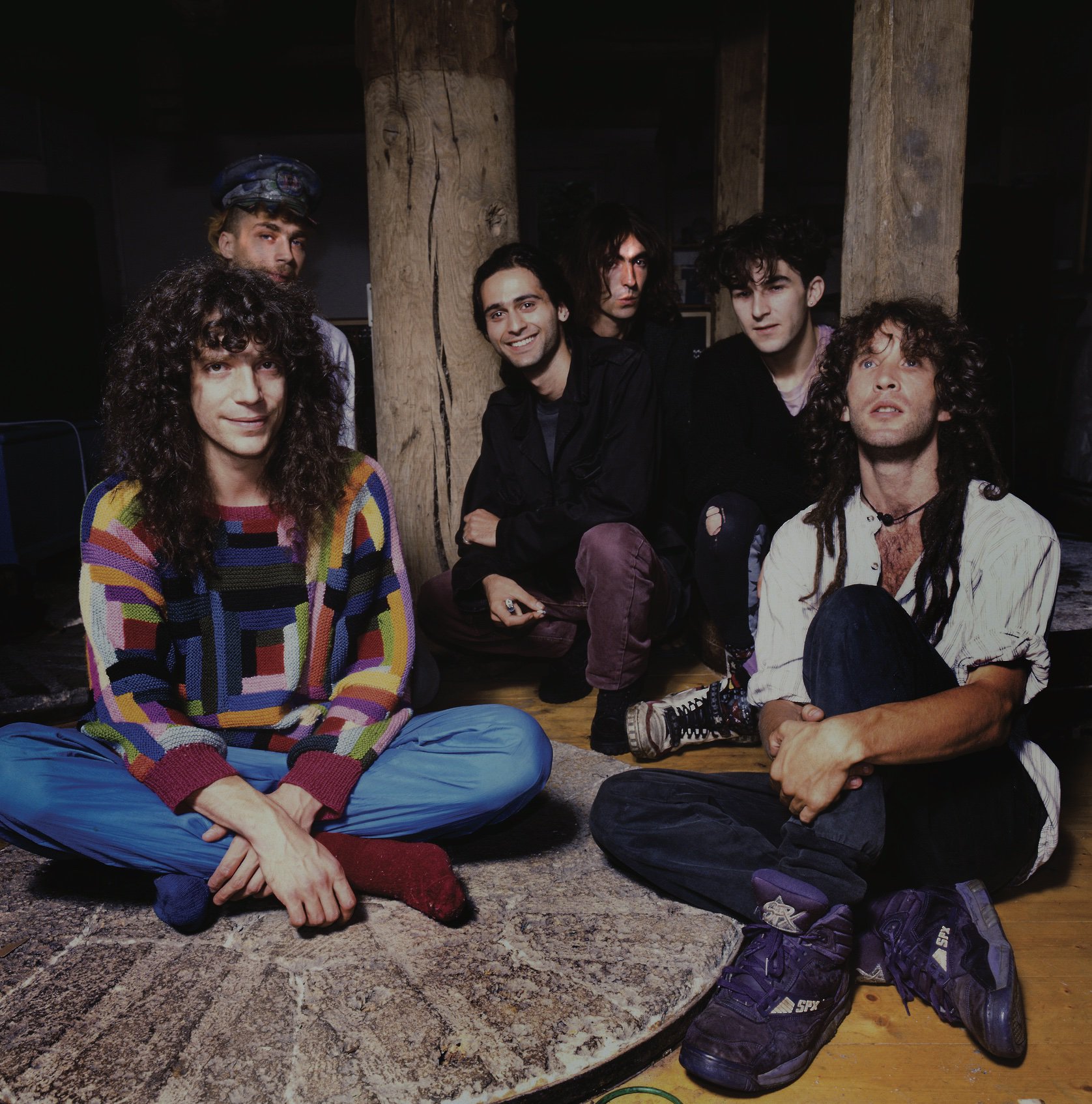 From that very first jam session, a musical compatibility was evoked that has since been a trademark of the Ozric Tentacles. It's a signature blend of hippy aesthetics and raver electronics with spiraling guitars, textured waves of keyboards, midi, samplers, and super-groovy bass and drum rhythms. Before long the band was laughing in dismay, as requests came piling in from people who were looking for more music by “Ozric Tentacles”, or “The Ozrics”, (as they had become more commonly known). The band swiftly claimed their place as a staple of the UK's burgeoning festival scene, and are now credited as one of the influential musical linchpins of the scene's re-emergence.

1984 saw the band's first cassette release, “Erpsongs”. Recorded at home on a barely more than a domestic hi-fi and lined with hand drawn covers, it ignited the underground psychedelic scene. The album showcased a variety of styles, which has been a characteristic feature of the band throughout their career. Some tracks seemed a mixture of alien, spacey sounds in a floating ambiance, while other tracks showed the Ozrics' harder rock tendencies with a solid rhythm section underpinning soaring guitar and synthesizer passages.

1986 was a very productive year for the band with three cassette releases, “Live Ethereal Cereal”, “Tantric Obstacles”, and “There Is Nothing”. Live Ethereal Cereal, record from those early festival jams, showed the band to be hot psychedelic property indeed. There was also a truly new and unique form of reggae and dub emerging in their recordings intrinsic to Ozrics’ sound. ‘There Is Nothing’ featured increasingly more ethnic elements. Scales, styles, and samples gathered by Joie on visits to India, and Ed on trips to Thailand became deeply entwined with the band's sound. At Stonehenge festival the year following the bands inception, Ozrics had picked up a second synth player, Tom Brooks, who helped to fill in the audio spectrum with bubbling ethereal effects. In 1987 “Horse Drawn Tom” gave up his synthesizers for greener pastures, (…after renouncing the electricity used to power them).

Following Tom’s departure, Ed found himself forced to fill the sonic gap by focusing more on his own synthesis and keyboard skills. (A concept that had become appealing to Ed after releasing “The Grove of Selves” by Nodens Ictus, earlier in the year. Nodens Ictus was Ed and Joie’s ambient project, still very “Ozricky”, but mellower in nature and without the live rhythm section, hence they decided that they should release the project under a different name.) This shift would prove not only to be a comfortable success for Ed, swapping seamlessly between guitar and keyboards, but the ethereal sounds of his Sequential Circuits Pro-One synth, and Roland D-50 keyboard would essentially become a molecular base of Ozrics’ DNA.

1988 saw the band's most cohesive and endearing of the early cassette releases, “Sliding Gliding Worlds”, a favourite for many friends and fans. Around the same time, drummer Tig evaporates, and Ozrics recruit Merv Pepler, a 21 year old phychobilly drummer from Somerset. Merv’s raw untrained energy, which managed to shift through multiple time-signatures without a thought of it, would not only suit the band, but inherently provide a solid backbone for their sound. Six months later the band would release their last cassette-only release, “Bits Between The Bits”, and closed the tape only period of the band with a collection of odds and ends from the 1985 - 89.

The live performances from this time have become something of folklore amongst the hardcore fan-base: jam sessions lasting for hours and featuring an array of musicians. Tape trade amongst these fans has reached the feverish dedication shown by the Dead-heads in the USA, with similar rules of free trade and no profit. Realizing that signing with any of the established companies would inhibit their creative freedom, in 1989 the band formed their own record label, “Dovetail Records”. Their first major release, (available on CD, vinyl, and cassette), “Pungent Effulgent” invoked a clutch of rave reviews from somewhat startled music journalists, and is also a blinding example of the live experience and the raw energy the Ozrics put into every performance.

Throughout the early 1990's, constant touring of the UK helped the Ozric Tentacles to build a tremendous national fan base on a grass roots level. In 1991 the band’s first and only single was released. “Sploosh!” scored the group a #1 in the indie charts, and spilled the band into the mainstream. The single was released just as dance music was exploding in the UK, and the ravers embraced its hypnotic pulse. The subsequent album “Strangitude” took the music to a new level, leaning towards electronic but retaining the authenticity of an Ozric recording. By 1992 The Ozrics were the soundtrack to the summer. Travelers were suddenly trendy and free festivals were attracting tens of thousands of people.

With the band's 1993 release "Jurassic Shift," which debuted at #11 on the British indie chart and climbed into the Top 10 in the National Album Charts, the Ozrics eventually won over the adulation of mainstream press, and found themselves heralded in publications such as NME and Melody Maker. It was, and still is, an astonishing accomplishment for a band with no celebrity status, and no major record label backing. Over the years Ozrics have toured extensively both at home and abroad, performing regularly throughout Europe, Asia, North America, and South America. Ed’s influences are rooted in ethnic scales and the native music of many continents, rather than from any particular artist and this is continually illustrated in the twists and turns of each piece and the varying sounds used in their construction.

As the Ozrics continue to create genre-free music with no boundaries in sight, it means that their aim and goals are enthusiastically raised as they strive to take each track to a new level, and each album must grow substantially for the band to be satisfied. Post 1994, along with the release of “Arborescence”, the music press had realized that the Ozrics were never here for chart success, nor to be the latest fad, rather to simply have the opportunity to explore their music with an almost obsessive zeal by wringing the most bizarre and unlikely sounds from whatever instrument they happened to be playing, …and long may they continue to do so!